Info and things to go on the Isle of Wight

The Isle of Wight is located just off the south coast of England. It boasts a stunning coastline, picturesque countryside, many fantastic attractions and is a wonderful place to visit all year round. The Island is reminiscent of a more relaxed and slower paced time. This is one of its main attractions. The diamond shape of the Island measures just 23 miles by 13 miles, and has 57 miles of beautiful coastline. It is also England’s largest Island. The Island has over 477 miles of roadways and over 500 miles of pathways and cycle ways. There are also 203 scheduled monuments, 60 ancient monuments and 1910 listed buildings. The Military Road (A3055) has been voted in the top 10 of best scenic roads in the UK. It runs from Chale to Freshwater Bay, and runs almost along the cliff edge with the sea to one side, rolling Downs on the other, our favorite drive!  At high points you can see the whole coast all around you and the coastal towns on the south coast of the main land. The Isle of Wight is also a regular holder of the sunshine record in the country having an almost sub tropical climate. Often described as having its own micro climate. Its varied landscape and climate makes it a great place for walking and cycling as well as a traditional bucket and spade beach holiday!

Our chalets are located in Sandown, Yaverland, just above Yaverland Beach – this wide expanse of unspoilt beach is one of the Isle of Wights best beaches. At one end of Sandown Bay is characterised by the craggy cliffs and clean, crisp waters. Quieter than the other beaches between Sandown and Shanklin, Yaverland offers safe swimming, sandy beach, and fossil hunting by the cliffs. The beach can be reached within a few minutes walk from the site by coastal path or road, and also has a car park and cafe for a relaxing stop.

Yaverland is within the Isle of Wight’s Area of Outstanding Natural Beauty (AONB) & Sandown beach won ‘Beach of the Year’ in the BBC Countryfile Magazine awards 2019.

Sandown is on the southern coast of the Island and  itself has a huge expanse of safe beaches extending all the way to Shanklin & is known for being a family friendly resort. There is plenty to do in Sandown, from Sandown pier, pitch & putt to an 18 hole golf course. The Isle of Wight Zoo, world renowned tiger & big Cat Sanctuary & nearby is  Dinosaur Isle, a museum which operates regular public fossil walks. In the summer months surf school operates as does a life guard station.

There is a nearby cafe and car park close to the chalets offers easy access to the esplanade that runs past the bandstand restaurant/cafe all the way through Sandown and on to Shanklin. This is perfect for walking or cycling etc offering many stopping points along the way to shop, eat or pop into the pier for every kind of amusement.

Sandown centre is just a 15 minute walk from the site and it offers everything that you could need. Dotted along the way are many of the local attractions designed to keep children entertained and so you can stop off and almost make a day of simply walking into town. The esplanade also offers great access for wheelchairs or prams etc as it runs literally from the bottom of the Yaverland hill all the way to the town.

Dog walking is a dream as you can dip on and off the beach along the way and there aren’t any rocks or other types of dangers that could cause concern to animals or children. The beach at Yaverland is dog friendly all year round & Sandown beach dogs are only permitted between 1st October to 30th April.

Many of the cafes and bars are dog friendly and all obviously cater for children. The Driftwood beach bar is actually the only beach bar on the island and is particularly cool. They have a great food menu and you can sit outside or in, to suit any weather conditions. In the summer they have regular live music outside on the decking so it is a real gem. We are very lucky to have this on our doorstep.

Sandown benefits from many small supermarkets in its centre and there is easy parking right outside. It has a selection of great bars and restaurants including Italian, Indian and Chinese as well as traditional food not forgetting fish and chip shops, a very important part of the great British resort experience.

If water sports is your thing  Yaverland is popular with Kite surfers, dingy sailors &  surfers. In Sandown you can hire kayaks, paddle boards etc. The beaches are very well sectioned to protect swimmers etc from water sporter’s so don’t worry if you prefer to take a leisurely  swim with the kids. 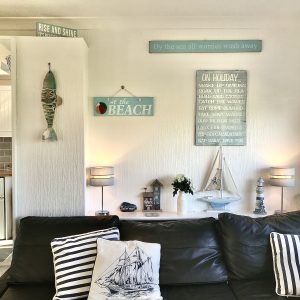